When photography was created it was first only used for documentation, a means to an end. The process was solidified with light sensitive materials such as silver plates, collodion, or glass plates. What people were suddenly ready for was a way to now capture themselves forever in a photograph, to remember family and looks. This began the Cabinet Card in 1870, standing 4 ¼ by 6 ½ you can see you and your family in stunning sepia.

Matthew Brady, a famous civil war photographer, offered the cards for his clientele and used the trademark “Imperial Carte-de-Visite” and this became a fixture in the 19th-century. 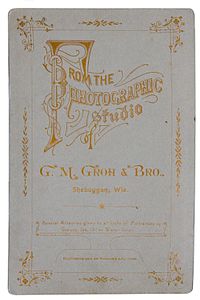 Photographers who partook in this craft would have their own signature and branding on the back of their cards, everyone of them being different than the next! The reason for the frozen, sad, faces was that the exposure was very long, which lead to having to be VERY still in the images to not include any motion blur. If you see an in-focus cabinet card, just think of how long they had to sit still!

The Cabinet Card was eventually phased out by modern snapshot techniques but remain a staple in history, forever freezing the dead-pan looks of our ancestors.